Vung Tau is a major port near the mouth of the Mekong River. During the American war it was the main logistics support base for regional American forces and the Australian Infantry’s Task Force base at Nui Dat, located in the centre of what was then Phuc Tuy Province. Now VT is a hub for a thriving offshore oil industry, largely operated by the Russians. The lights of many ships can be seen from shore at night.

VT is a pleasant, almost sleepy seaside resort city thru the week, then experiences a massive influx of Saigoner’s each weekend as they seek temporary relief from their fast paced, big city life. While I never visited Saigon in 1969-70, on 2 occasions I had weekend “R&C” (Rest & Convalescence) visits on leave here. Ironically, the VC used the city for the same purposes back then, but obviously they kept a very low profile. The city has grown enormously & is unrecognisable from those days, with many new tourist resorts and appartments up or under construction. Our hotel was genuine 5 star – far beyond the level of accommodation existing back in the war years. It is built on what was then the beachside site of the Australian R&C accommodation.

Virtually no evidence of the Australian Task Force base at Nui Dat – or its associated ‘Horseshoe’ fire support base – remains today, apart from occasional concrete footings. I wasn’t surprised that we could only speculate just where our unit lines on the base perimeter might have been, as over the intervening years, there’d have been at least 6 rubber tree plantations (replaced every 7 yrs) grown and then replanted again, there.

What had been the bases sealed airstrip now serves as the main thoroughfare of a very small village of Nui Dat, and quarrying is eating away at the actual “Nui Dat” hill where the Special Air Service were based. Meanwhile, the minor nearby villages of Hoa Long and Baria (now the province capital city) have both prospered and grown exponentially, with just a couple of Baria town reference points from my first visit remaining in tact.

Several days later in Hoi An, I met a SVN Regional Force veteran demonstratingaccomplished Aussie English, who back in the 1970’s worked for the Australians in Baria. He was later wounded by a VC bomb – showed me his leg scar. He was very keen to have some Aussie dollars – specified not coin. He seemed excessively pleased that I took his photo (included in Hoi An Post) – we shook hands – and I obliged his quest for Aussie dollars.

First photo below : “Once were warriors” – 4 of our tour group vets served with 8RAR. SAS hill in background. Pic taken from what was “Kangaroo Pad” for choppers. 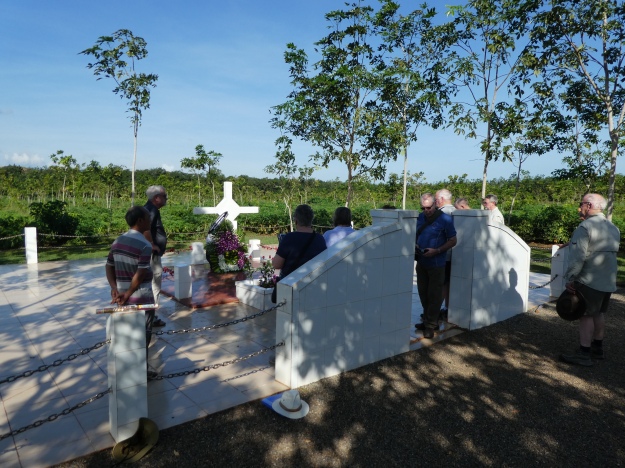 We visited and entered the VC tunnel system at Long Phuc (refer pic of plan, above) which was rather breathtaking to me & my fellow vets, as it’s located just 2 km from the Aust Nui Dat base perimeter. It can be certain that Australian infantry (including maybe even myself) would have patrolled unawares, directly over this installation. My RF friend from Hoi An claims that the Baria RF knew about the VC use of these tunnels, saying they had no incentive to expose them to the Aussies. Astonishing if true. Unlike at Cu Chí where tunnels were first dug to fight the French, here they started tunnelling in the 1960’s when the Americans invaded.

Several photos of our wreath laying visit to the Long Tan cross – one of just three foreign war memorials permitted in VN. Also one by the French at Dien Bien Phu. The other not accessible as it’s within the walls of what was the American Embassy in Saigon.

From VT we also visited the Long Hai hills “Minh Dam” secret zone, where as a result of “Operation Hammersley” on February 28th, 1970, 8 RAR were awarded a SVN Presidential unit citation. During that operation 1 Platoon, A Company lost 7 Killed In Action / 1 Died Of Wounds / plus 1 supporting arms KIA on what was reported in the Melbourne press as “Black Saturday”. The three 1 Platoon members in our touring party held a remembrance service aside a jungle track, laid flowers and lit incense to our fallen comrades. For the definitive story of this action, I refer you to “Combat Battalion” by Robert Hall, Allen & Unwin, 2000. Much of the Long Hais area is still restricted entry due to the danger posed by still live land mines.

1 thought on “Return to what once was Phouc Tuy Province”