Respectfully touring Saigon’s War Remnants Museum – with it’s photo galleries of war victims – records of American atrocities committed – agent orange’ victim images – then viewing the adjacent French (later SVN govt) ‘Tiger Cage’ torture prison (complete with guillotine) was salutary context for a visit next day to the VC/NVA tunnel systems at Cu Chi. As ever was so, the victors of war write the history and sanitise their own record. There’s no dispute that what’s displayed at the War Remnants Museum is factual, but the explanatory text expressed is often unsubtle propaganda – understandably being totally slanted from the Communist perspective. Interestingly, a couple of our more mature age guides who lived thru the war era have ‘unofficially’ noted brutality and massacre by VC/NVA against their opponents – both military & civilian.

When observing the tour itinerary, I hadn’t initially been interested in visiting Cu Chí, but I am very glad we did. Quite fascinating to witness the tunnel infrastructure and ponder the amazing discipline of the VC living underground, and how extensive and significant this was, yet never fully detected by the Yanks and their puppets. Interesting to learn that when 1 RAR were attached to the Yanks in this area early in the war, with their tracker dogs, they were the first to discover and destroy tunnels. Maybe the Aussies should have been kept here, rather than moved to Phouc Tuy.

The heavily treed, lush, light jungle around Cu Chí was reminiscent of some of the countryside we operated in – especially around bunker systems that we encountered and cleared. But a few days later in the Long Hai hills it was a surprise that landscape that had been largely open and dominated by boulders (even arid) in 1970 was now also jungle-like. The effects of large scale defoliant spraying from the air having diminished. Hearing the sound of ‘very real’ live fire from military weapons at the Cu Chí shooting range was quite surreal – literally ‘a blast from the past’ – with cowboy tourists burning their US$’s for the thrill. The loud noise a bit of a shock for non-vets in our party. Probably the only instance of Occ Health & Safety being enforced that I’ve witnessed over here, was the westerner cowboys being required to wear hearing protection!

Pics below selected from the delta trip – including elephant ears fish with lunch. 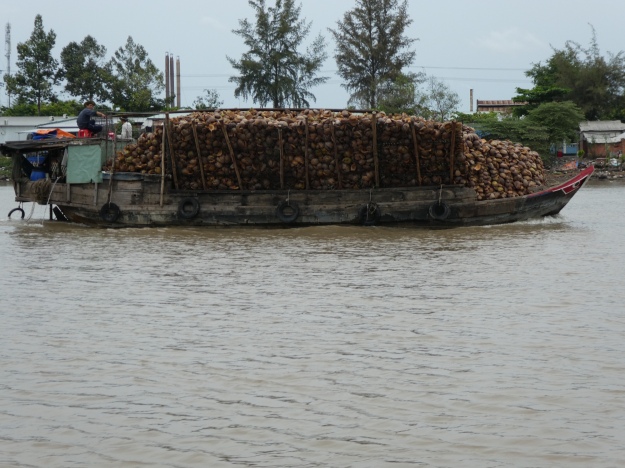 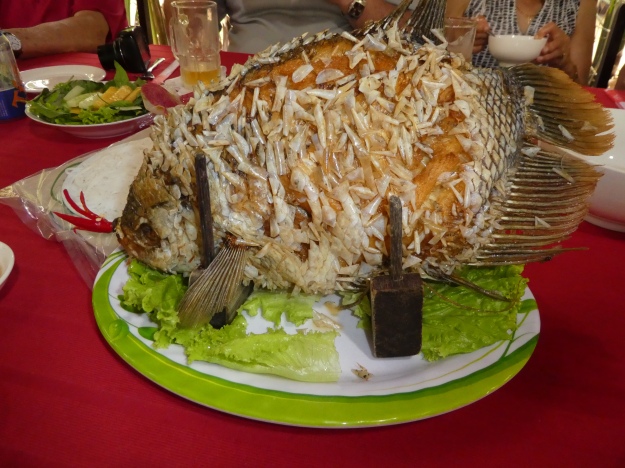 Our day trip from Saigon into the delta was very interesting – everything so green and lush. So it’s a bit ironic that VN is actually experiencing an unusually dry November, which is great for sightseeing, but some locals are quite concerned. Indeed it’s not uncommon for major flooding to be an issue normally in the delta at this time of year, like in 2017! Photo of Sth VN army veteran above with wooden leg – due to a mine explosion. Unlike most other ‘government wounded’ who were assassinated on returning to their village, perhaps he was spared for no longer being a threat to the VC. I took pleasure in exchanging big smiles, and a hand shake. He spends his days making sleeping mats.