Driving from Hanoi to Ha Long city, to then board a cruise boat for Halong Bay takes about 3 hours. Twenty tour cruise boats then sailed taking 45 minutes to reach the World Heritage Area which, being extensive (about 2,000 islands and limestone peaks) easily absorbed all these boats. In high season this excursion is so popular the number of boats apparently jumps up to 40 boats per day, with a mix of trip options : day trippers / over-nighters / or two nights afloat, which was my choice. Included in my itinerary was a day kayaking and swimming at a beautiful, secluded sandy beach. 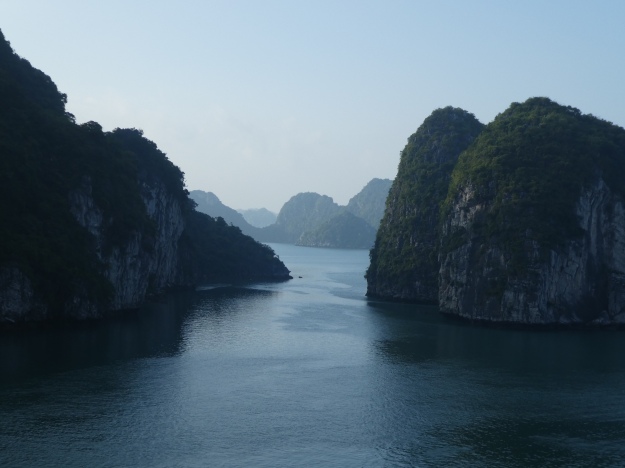 This tourist attraction really does measure up to the professional publicity photos and rapturous brochure descriptions – I’m disappointed that my photos just don’t fully capture this very special place.

On the Hanoi-HaLong tollways – many with 6 lanes of traffic travelling at 120 km/hr – thankfully the ubiquitous, low-powered motor bikes are excluded. Like here, it seems most of VN’s major roads are now lined with eucalyptus trees. And its common to see large plantations, even weed-like infestations of ‘our’ distinctive gums across areas of the countryside.

Since back in the mid-60’s various quick growing species derived from Northern Australia have been introduced, originally to revegitate land degraded over many centuries. And of course to rehabilitate areas more recently denuded by American spraying of herbicide to destroy enemy crops and forest cover during the re-unification war. Export of eucalyptus wood chips to Japanese and Korean paper mills is now big business. And eucalyptus oil distilled from gum tree foliage is probably more popular than in Australia – often made by small scale local operations.

Shrubs planted in median strips, and running alongside major highways (especially in the South) are sculpted into attractive, repetitive pattern shapes. These manicured gardens typically run for many kilometres in a stretch, obviously providing employment to maintain them. And I’ve seen work teams manually sweeping up litter from the side of these highways as high speed traffic wizzes past, just a metre or so from the workers. OH&S is not a priority in VN with high risk taking also very evident on building sites. The following pic being a rather minor example of that. 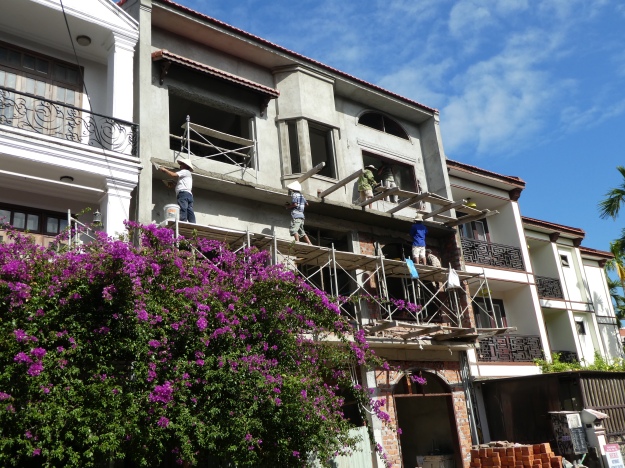