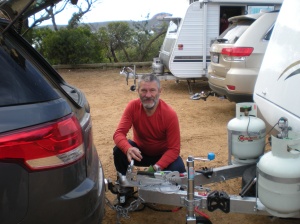 Our first sighting of Lucky Bay was so impressive, we kept stopping the car to take photos before we even got to the campsite. Lucky Bay was named by Matthew Flinders when he found shelter from a summer storm here during his navigation of the Recherché Archipelago in the HMS Investigator in1802. The next bay along, Thistle Bay , was named for the Ship’s Master, John Thistle, when they found fresh water there. We are in Cape Le Grand National Park and it is stunningly beautiful. White sand beaches ((scientifically proven the whitest in Australia, apparently), turquoise and dark blue water, and amazing rock formations. We are already seeing some lovely wild flowers and there are kangaroos pottering around the camp site and sunning themselves on the beach. Feels a lot like Paradise. Tomorrow we will move on to Cape Arid N Park and camp nr Dolphin Cove which is supposed to be, perversely, a great spot for whale watching. Our next stop after that will be Stokes N Park. It is actually quite difficult to progress along the coast because we are constantly seduced by advice and stories from other travellers and the constant refrain of ‘You can’t miss ……./ You must see ……..etc. We have already decided we will have to come back. 3 months is too short!
It is great to be independent in the van, without the need for power. We can enjoy the national parks and stay at caravan parks when we want to do some laundry etc. We feel we have the best of both worlds.
We fall asleep to the sound of the waves rolling into the bay.

There are 17 caravan sites at the National Park camping ground at Cape Arid and we have it all to ourselves. We are perched up on the headland with a sweeping view of a glorious bay where, this afternoon, we could see a number of Southern Right Whales cavorting in the waves about 50m from shore. We discovered that we could even see them from our bed in the van. Not bad value for the grand sum of $13.20/night. We feel very lucky to be able to easily access such a magnificent place. Thank goodness the coast is available to everyone and not lined with hotels and resorts.
The whales come up from sub-arctic waters to calve and are most numerous May/June but there are still large numbers to be seen, including mothers and their calves. Whales have VERY LARGE babies (ouch) but since all the mums choose the water birth option, maybe it is not too bad!
I am already running out of superlatives to describe this coastline and we are only a few weeks into our trip. I might have to devise a private rating system for the future.

Long, but worthwhile, climb down to the blowhole

The waves that produce the dragon’s roar from the blowhole

Head of Bight. There where whales but looked the size of goldfish.

I am getting a bit better at the photos.  Should be – we have been in Macca’s all morning.

Waiting for a call from Ford to say that the car is ready and we will be off to the national park.

Lovely to have fresh food again although very expensive.  Once everything is confiscated at the quarantine station nr. Eucla there is no opportunity to stock up again for a few days.  Business opportunity, Someone!  The roadside stops on the Nullabor are dispirited places specialising in fried food and you can’t get a decent coffee.  2 half-decent coffees cost $9.60 at the BP Roadhouse at Norseman.  Apparently Norseman is named for a horse which pawed the ground and turned up gold-bearing quartz for its owner.  We have had no such luck as yet. 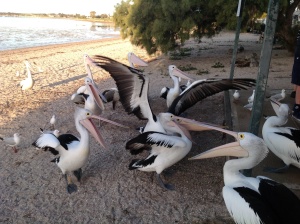 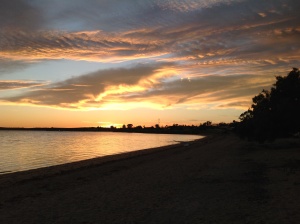 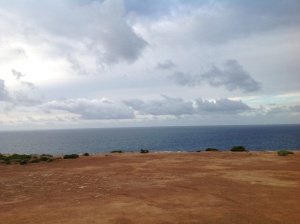 The Great Southern Ocean from the Bunda Cliffs

We loved Streaky Bay and could have stayed longer, but I suspect that we are going to say that about a lot of places. We were able to have a lazy day and catch up on washing etc and we also drove out to Cape Bauer, which is spectacular. We watched the waves crashing in, followed by the roar of the blowhole which sounded like a fire-breathing dragon. Saw Crimson Chats flitting across the dunes and there were two Night Herons roosting in the caravan park. Geoff went for a ride to the back beach in the evening and we had fish and chips for dinner. The King George Whiting is delicious.

The next time we have reasonable internet access I will upload some more photos.

Sunday 31st we left Streaky Bay and drove all day to an off-road free camping spot about 40km short of the WA border. We were perched up on high cliffs with the huge vista of The Great Southern Ocean spread out in front of us. Sadly, no whales to be seen, but we did see some at Head of Bight along the way. All was calm when we made camp but gale-force winds blew in overnight, which meant little sleep. The first of geoff’s trips outside (in his jocks) was to unlock the pop-top so that we could bring the top down just in case it ripped off. Second trip was to turn off the gas because we realised we couldn’t run the fridge on gas with the roof down. Third trip was to actually clip the roof down. Fourth and final sortie was to remove the securing tapes from the awning arms because they were flapping around and driving us nutS. It was quite a night!

Diesel at the Nullabor Roadhouse $1.99/l. Fuel costs rather alarming.