Before  we actually left Bailleul we did a tour of the Unesco-classified, Beffroi (Belfry) de Bailleul.  It was originally built in the 12th century, and it reflected the rise of the middle class through agriculture and industry – linen, lace, textiles etc.  It has been destroyed and rebuilt many times, always in the same style, the last time being in 1932 after the whole town was reduced to rubble during the Great War. Geoff stayed with the group and climbed to the second- last level (too windy for the final assault) but I stopped climbing once I had had the opportunity to stand behind one of the clock faces, which was amazing.  The belfry is constructed in wood so that it can move with the very strong winds which are common in this region. 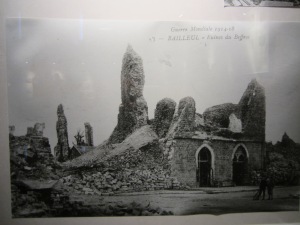 Beffroi de Bailleul as it is today. Geoff was at the second level from the top 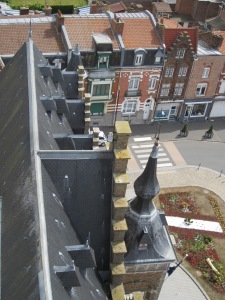 View from the top

The bells, which were fashioned from cannons.

Melisande, who once graced the very top of the belfry. Siren, mermaid or witch?

Behind the clock face . The intentional error in the Roman numeral for 4 is that the three white spaces, between the four black bars, instead of IV, represent the Holy Trinity

As for the man with the skewer – what can I say.  He graces the top of the stairs at the entrance of the town hall.   A captain of industry perhaps?