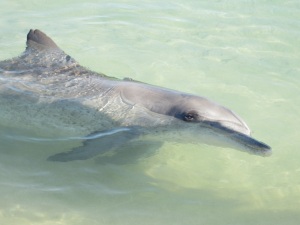 I am The Chosen One! We were at Monkey Mia early this morning for the first of a possible three ‘dolphin experiences’,( depending on how often the dolphins choose to come into the beach). Interaction with the dolphins is strictly controlled and the faithful gather at the water’s edge, in ankle-deep water, looking hopeful. The dolphins cruise up and down along the row of spectators and are remarkably relaxed. Volunteer staff stand in the water with a bucket, each containing 5 small fish, and people are randomly selected to feed a fish to a dolphin. I was thrilled to be picked out. It was a wonderful experience to be so close to such a beautiful creature. No-one is allowed to touch them and only 5 or 6 specific females are fed, and they are only fed a small amount to ensure that they continue to hunt fish for themselves and thath they don’t neglect their calves. Three generations of dolphins have visited, and continue to visit, Monkey Mia and they are all identifiable (by their dorsal fins), and are the subject of ongoing research. If it all sounds stage-managed, it is done very well, and it is far better than the free access of the 60’s and 70’s, when many dolphins died, or were killed or injured as a result of their interaction with visitors. We stayed on for the second dolphin feeding session and we were within a couple of feet of them, because there were fewer people. Weather was perfect and we had a great morning.

This afternoon we drove out to Eagle Bluff for an expansive view of Shark Bay and the long, thin shadow of Dirk Hartog Island, named for the first white man to arrive on Australian soil in October 1616, 154 years before Captain Cook. Shark Bay is shallow and very sheltered and its vast seagrass m

eadows feed and shelter globally endangered species. The common shark in the area is the Nervous Shark, which probably accounts for us not seeing any! We did see a stingray, but from a conhsiderable distance.j

This is a marvellous region, where the desert meets the sea, and it is as far north as we intend to go. We had hoped to reach Ningaloo Reef but we are a bit late in the season, having dilly dallied here and there, and it is getting very hot in the north. Apparently National Park camp sites are also hard to get, because many were washed out in a huge storm (600mm rain in 24 hrs), and there is a lot of redevelopment taking place.

Tomorrow marks the beginning of our journey home, as we head south to Kalbarri. We have travelled 9,000 km so far. 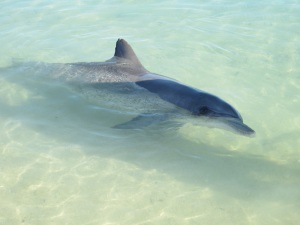